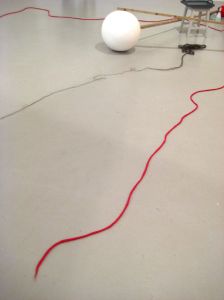 Laura has worked as a freelance producer and arts manager in a variety of capacities, including at People Show, at Matt’s Gallery, where she completed the Stanley Picker Internship supporting the gallery’s administration, production and press activity and she later took the role of Artist Manager at Matt’s Gallery in 2018-19. In 2010/2011 Laura was a Trainee Producer at Artsadmin, where she worked with a variety of artists on a range of live, visual, installation and participatory projects. You can read about her experiences during her Traineeship on Artsonline. Her job was made possible thanks to the DCMS Jerwood Creative Bursaries Scheme. She went on to work as an Assistant Producer with Artsadmin on Live Art Collective East projects with Richard Dedomenici, Caroline Wright and Mel Donohoe, as well as working closely with Sinéad O’Donnell on CAUTION, an Unlimited commission for the London 2012 Festival. She has worked as a Production Assistant and Stage Manager with Artangel on Mark Storor’s A Tender Subject, a multi-media live art installation featuring a cast of performers from London-based Only Connect creative arts company.

Between 2013-2016 Laura curated and produced her own live art events in London under the banner of Beg, Borrow, Steal. These have taken place at CGP London Dilston Grove and Toynbee Studios and have seen a range of artists present new and existing works in supportive and flexible contexts. In 2017 she curated and organised I WANT MY IDEAL PASTE, a group exhibition at KELDER Projects, London.

Laura was a visiting lecturer on the BA Theatre Practice – Performance Arts course at the Royal Central School of Speech and Drama, where among other things, she supported second year students in their work on programming and producing The Accidental Festival.