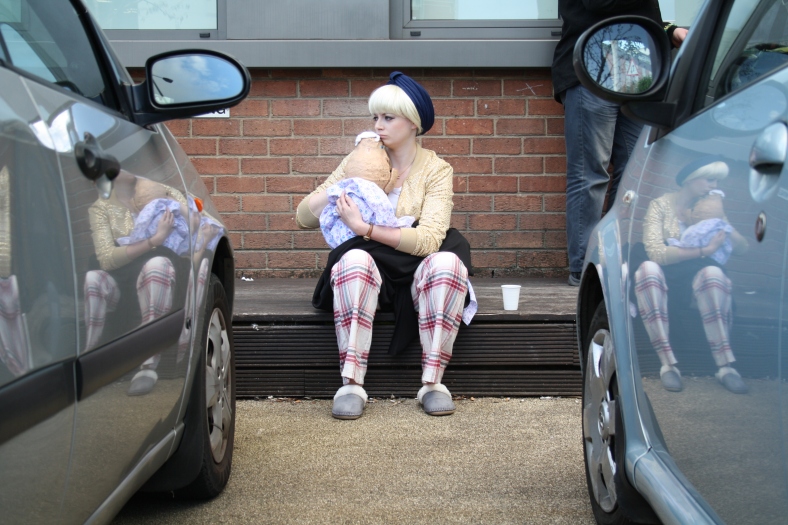 Laura was invited to perform at Golden Thread Gallery in Belfast as part of Late Night Art, September 2012. The Outsider was performed on the periphery of the gallery, on the outskirts of the existing exhibition CAUTION, curated by Sinéad O’Donnell. The Outsider was created as a response to Laura’s work (as Assistant Producer on the CAUTION exhibition and project) with Sinéad O’Donnell, Mariel Carranza, Sylvette Babin, Poshya Kakil, Paul Couillard and Shiro Masuyama on CAUTION, an extensive international collaborative performance art project.

The Outsider was a durational performance in which Laura embodied the fragile aspects of her personas, Donna Kebab & Chips. She chain smoked, nurtured and slept outside the gallery and in front of the dole office opposite for several hours during a late opening of the exhibition.

“When I was asked by Sinéad O’Donnell to perform at a late opening of CAUTION at the Golden Thread Gallery, I immediately wanted to respond to the exhibition by becoming invisible. So much of what I had discussed and absorbed during my engagement with the project involved the invisible, be it disability, spirituality or conceptualism. Yet all of these invisible realities felt integral to the artistic and personal processes taking place and all were prevalent in my mind while in Belfast with the CAUTION artists.

Most of my work involves an adoption of personas, parallel identities which are somehow, often distantly, rooted in my own autobiography. Two of these personas are Donna Kebab and Chips, an eternally entwined pair of misfits that attract and repulse simultaneously and as such, inspire in onlookers an immediate and often vocal reaction.

My intention during the performance was to adopt the role of The Outsider, literally existing outside the gallery, literally existing and nothing more. The challenge came in overcoming the initially eye catching appearance of Donna and Chips and achieving some level of concentration that would allow me to withdraw from the energy of the event and the people present. Oddly enough, at some points I found this loophole in the atmosphere and I felt distinctly overlooked or unacknowledged. Despite this being my intention, a part of me yearned for attention or care and the performance became a small, personal test of endurance, as I began to truly feel I was Donna and Donna began to truly feel alone and outside. I spent two hours attempting to disappear, while appearing utterly other; attempting to do nothing, while appearing to do something.”