Number 23 was a devised, collaborative performance, constructed and directed by Laura and created from a starting point of some of her poetry and photographic self-portraiture. It emerged from an obsession with representation and mis-representation and a preoccupation with her identity in relation to class and gender.

Taking inspiration from the work of Jo Spence and other female, working class artists and theatre practitioners, Laura worked with six performers to devise performance material and experiment with a series of creative writing exercises. The piece incorporated cabaret performance, bingo, cookery demonstrations, stripping and sing-songs, as a black box studio theatre was transformed into Lower Rankin Working Women’s Club for one night only.

Laura was present, on and off stage, as Director and as Deirdre, the hostess with the leastess. The performers and technicians similarly existed both as Performers and Technicians and as themselves, or ‘themselves’. The lines between reality and performance were difficult to distinguish, the company repeatedly ‘failing to represent’ both their own identities and those of their alter egos. The audience were unsure of who was the butt of the joke… and whether anyone should laugh at all. 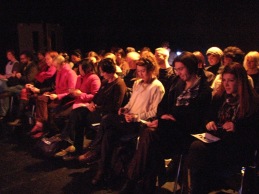 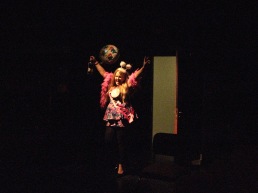 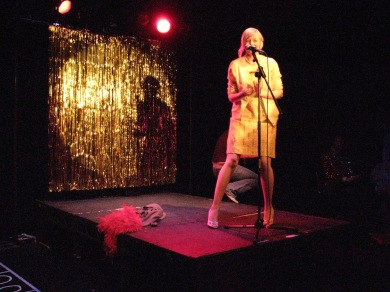 Number 23 (2009) by Laura Dee Milnes. All photos by Milda Sokolovaite

Inside Number 23 is a Common Species, pinned to a radiator. Stifled by her own smoke, she rarely flutters and often chokes.

She brandishes a cigarette, which helps her keep her distance and her head. She tends to babies and electric meters, she feeds the things that must be fed.

We never hear her cry out, from the other side of the UPVC that we peer through daily. Boxed in and tied down, we don’t have to worry that we’ll hear her pain.

She bats around her four walls (with fitted cupboards and a draining board) like a drunk blue bottle trapped in a light fitting.

From the sink, to the ashtray, to the worktop, to the table, to the chair, where she waits, to the cupboard – for the plates, to the drawer for the knife and the fork and the spoon. It’s only 3. Perhaps too soon? So she waits, for the oven to heat up. She takes another cigarette and tap tap taps the cigarette pack. She lights it up and lets it burn, takes in every breath, coughs out every concern. For five minutes… or two.

Then to the sink – the washing up, it’s all been done, she gives up. And back to the table, and she waits. She tap tap taps the cigarette pack.

The washer hums and the oven chips sit. She sits. She flicks through the pages of a magazine she’s already read.

The infant cries, she jumps to her feet. She disappears from the box we peer into. We don’t see her as she tends. We wait. We tap tap tap the reinforced glass. We wait. It’s quiet.

In she flutters, phone in hand, she natters away and natters away to Our Julie on the other end. A furrow in her brow, a furrow in both their brows and “I know, love” from one to the other. Her face, askew and set in its ways – a crooked jaw and bitter lips, tight yet full – injustice fed. She says her byes and lays down the phone and she tap tap taps the cigarette pack. We wait.

The oven’s ready, the chips go in, the grill’s turned on – fish fingers again – and she warms a bottle. We watch. She sets a timer – 14-16 minutes. She sits, she waits, pinned to the radiator. She waits. We wait.

The washing machine no longer hums. A little green light flashes away and she drags herself from her chair. Click-click, the washer door opens. She pulls it all out and puts it back in, save for a few small white bibs, which she drapes over her radiator.

She looks at the timer and she sits. Then she stands – turns the fingers on the grill. She sits. Next to the radiator, pinned to the radiator. We watch. We hope. She rarely flutters and often chokes.