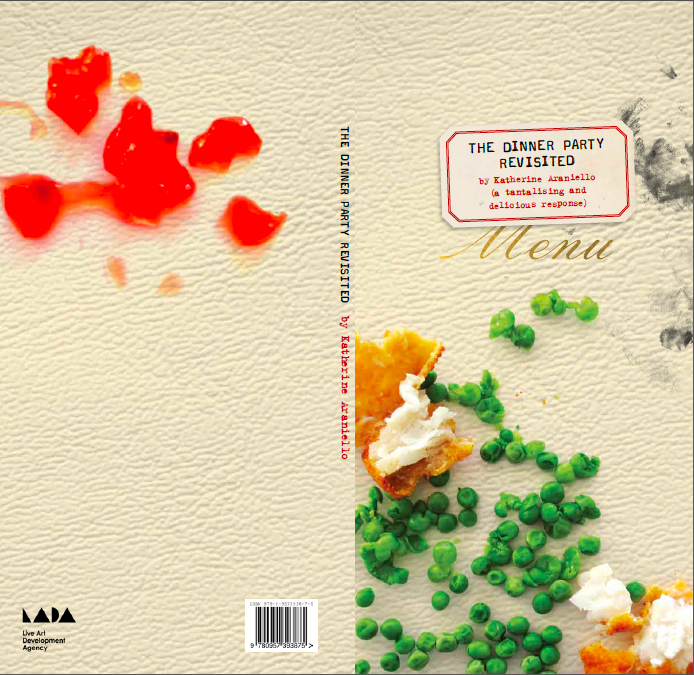 Under the Influence
by Laura Dee Milnes

To return to The Dinner Party Revisited is to remember a rendezvous backwards, with supporting evidence to fill the gaps. The bubbles removed my memories and melted my experience into a mass of misdemeanour, jelly and mashed potato. Let’s begin with:

Evidence No.1: Multiple blurred images on my mobile phone, all of which either feature a bottle of Champagne or a Chihuahua – evidently my two main concerns throughout the evening. My sober self can confirm that these were indeed the centre of my universe. One image is a perplexing selfie, with bottle of Champagne as I sit on a toilet. I can only assume from the time and date, at the Southbank Centre somewhere…

Evidence No. 2: A £20 note fell out of my bra the next day (having woken up, hideously late for work and fully dressed in my costume from the performance). I have no idea what this indicates.

Evidence No. 3: Photographic documentation of the performance. Katy, Pippa, the audience or myself were moving too quickly or unexpectedly for the photographer to get a good shot, sorry about that.

Evidence No. 4: A patchy memory, coming back to me in bursts. Going backwards from bursting through the doors at the Southbank centre, declaring that we’d arrived, stumbling on stage, reuniting Lucy with Pippa, trying to avoid being asked any questions, not really understanding what was going on.
Before that, a taxi journey from Toynbee Studios to the Southbank Centre with some audience members.
Before that, a taxi that hadn’t arrived.
Before that, eating jelly off the floor and being surprised at just how disgusting this could be to other people (I ate it off the top of the pile, for goodness’ sake).
Before that, a lot of fish fingers.
Before that, Katy feeding soup to an audience member with a straw. Before that, waving at the camera and communicating with the performers at the Southbank Centre, via live stream, with no audio between us. It felt glorious. We were not alone.
Before that, necking Champagne quickly, sometimes through a straw, often finding it almost unbearable and difficult to swallow, but doing it anyway out of some sort of twisted sense of duty to become inebriated. Before that, entering the room, taking a seat on the stage next to an inflatable effigy of Katherine, to which I was attempting to feed Champagne through a straw. Realising that the audio from the Southbank wasn’t working and that we wouldn’t be able to hear commands from Katherine. Non-verbal communication between Katy and me, trying to work out what to do. Somehow synthesising the idea that we’d just go with it – fuck it.
Going with it.
Letting Lucy be the star of the show.
Before that, hanging out on the back stairs with Lucy jealous of her composure under pressure.
Before that, making an obscene amount of instant mashed potato, soup, peas and the most elaborate construction of fish fingers I have ever accomplished and am still proud of.

Evidence No. 5: A lingering sense of satisfaction that I was part of this hazy evening of discord and deterioration. I liked Katherine’s work anyway, so of course I said yes when asked to perform in this piece. What I didn’t expect was to really understand the chaos of a confusion in communication caused by constant interference, from the inside out. Interruptions to the status quo, obstacles everywhere – in the language, in the staging, in the faltering technology often failing us. All aspects of the experience became an impeccably imperfect metaphor for a world in which everything is inaccessible to everyone in some irritating way.

Nothing is straightforward, everything takes time, effort and a generous dollop of frustration until eventually a collective “fuck it and fuck you” attitude prevails and through a resolute, DIY approach the work triumphs and tests its own boundaries, pushing on through, crushing whatever falls in front of its wheels.